Emptying the piggy bank has been an annual event in our home for some years now. I would realize that the piggy was feeling heavy and we would dump his shiny piggy innards onto the floor and count up the total. I would then put the money in a bag and allow the kids to spend it somewhere like Target. They would spend most of it buying a vanilla milk box and a cookie at Starbucks, but it was their money to spend as they saw fit. Let me back up and provide some context: my kids do not get paid for chores, grades, or anything for that matter. The money totally comes from being found, either found on the street on the way to the park or more often then not, found on Daddy’s nightstand after he has emptied his pockets. We allow them to take a coin or two every so often, but my husband does require that they know the name of the coin or they can’t take it.

I liked this plan well enough because the kids were learning the names and sometimes the denominations of the coins and perhaps even some basic money sense. The problem came because it wasn’t really how I wanted them to view money in the future, as in totally spendable. So this year I decided to change up the routine.

The beginning remained the same, we dump one piggy bank out on the rug like normal. We work as a team to sort the money into like groups, then into dollar groups. I lead this activity by giving the directions like “Now put the quarters in piles of 4 and the dimes in piles of 10” etc. My kids find it very fun and take the counting very seriously.

Next we determine the total by counting the dollar piles and leftover coins. Once we have the total I then label three bags: Save, Spend, and Give with the child’s name. We put half of the money into the Save bag. This is returned to us parents and we will then transfer that amount into the child’s 529 college savings account. Yes the bank will probably think it is silly that we are transferring $4.50 to a savings account, but I want my children to know that we followed through on depositing their money. Next we put half of the remaining money into a bag for spending. My daughter put her bag in a prominent place in her room so she won’t forget it next time we go to a store. My son chose to put his Spend money back into his piggy bank. I want to brag about him being frugal but the reality is that money in the abstract means nothing to him, but the clinking sound of coins going into the bank is satisfying.

We then put the remaining funds into the Give bag. I gave them two choices on what they could do with this portion of money; they could put it in the collection plate at our church or give it to someone who is homeless. My son chose the first option and my daughter the second.

I am excited to continue this yearly tradition as they grow and “real” money starts coming in from the tooth fairy and relatives at holidays. I look forward to helping them save for their future and see the excitement when they have spending money of their own. I also look forward to helping them find a cause that they feel passionately enough about to use their Give money on. 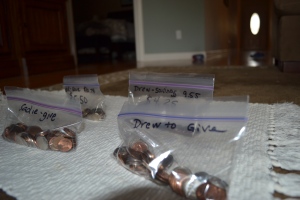