As a parent I finally feel like I am getting the lay of the land of the second plane with my six and a half year old daughter. I am decoding what it means for her (and me!) and who she is becoming in this new plane. It has led to several eye opening moments and a few frustrating ones as well.

Here’s what I’ve observed so far:

I have been blown away by my daughter’s creativity lately. Her brain definitely seems to be visualizing and conceptualizing things in a new way. The other day she was in her room folding paper in various shapes which led to putting the shapes together to make a house which led to making things for the house like little plates with food and a TV showing the World Cup. It was awesome to witness and so fun to hear what she had added when she came into the living room to give updates. 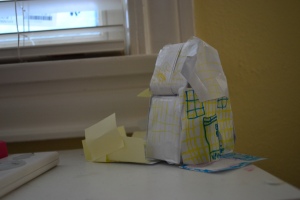 The ever expanding creative house project. She is now determined to add a pool!

Another thing that is so great is how she has become “kid funny”. She now enjoys the time honored tradition of bad kid jokes.

She has told jokes and then literally slapped her knee and chuckled. It is awesome to remember at some point I also liked knock-knock jokes and a good pun. The innocence of the humor is so much fun to relive through her eyes. It is a nice reminder that kids are still kids even in our current times.

There were a few things that I knew about the 2nd plane from general Montessori reading and curriculum that I was interested to see in my own child. One of those things was the idea of research. Most people know that kids are naturally curious and prone to ask ‘why’, but Montessori encourages the child to find out the why with as little adult intervention as possible.

My husband and I have tried to prepare our home environment to encourage research in a few ways. One of the ways is to deflect the ‘why’ back at the child. I will respond to her “why” questions with “why do you think…” I find that she usually has an answer and then we can have a better discussion about the topic at hand or find the answer together. Another way we encourage research is to have a few resources handy. I found out that a few awesome atlases were on the bargain table at Barnes and Noble and snatched up a world atlas and a body atlas. These two books have been enormously helpful in encouraging both curiosity and independent research. For example, a dear friend of ours was moving to Israel. We looked together at the world atlas to discover where Israel was in relation to our house. We talked about how he would have to get to Israel from Houston and if he would be able to visit regularly. Both of my children like to just peruse the atlases. I would really like to get a space atlas to add to our little collection.

The body atlas certainly holds their attention and encourages many, many questions. I wonder why…

Another thing I had read about and was excited to observe is the emergence of the ethical self. The idea that the child is trying to figure out what is fair and ethical in our culture and society. I noticed that my daughter was tattling on her brother more frequently and the phrase “that’s not fair” has come up more than once this summer. As parents, my husband and I have to continue on our consistent path. Tattling is a non-starter in our house and forever will be. I try to be consistent and fair in my parenting and when its not possible like when one child is invited to a birthday party and the other is not, I try to explain the reasons as efficiently and without drama as possible.

In this context I am using ugly in a very southern way, not as an appearance but as an action. And boy has my daughter has been acting ugly recently! She has unmistakably entered the “Age of Rudeness” as Maria Montessori coined it. My sweet kindergartner is gone and replaced by a blunt direct kid. This article by Maren Schmidt certainly helped give me perspective. Yes it is normal. Yes she is exerting her mental independence and sharing her own unique opinion for the first time. The problem I am having is how do I respond to this normal developmental behavior because it makes me nutty! I can’t bite my tongue when she is being rude and so far calling her out on it isn’t really helping! I also have to be careful in my response because I don’t want her to feel like she can’t share her opinion or speak her mind. I think what I am looking to do is teach tact. So dear readers how do you teach a six year old tact? And how should a parent respond to a child acting ugly?

4 thoughts on “Montessori Ideas: The Good, the Interesting, and the Ugly of the 2nd Plane (so far)”